The grape that can with logic absolute
The two-and-seventy jarring sects confute:
The subtle alchemist that in a trice
Life's leaden metal into gold transmute.

The Rubaiyat of Omar Khayyam

Viewing this work is like watching an eclipse, experiencing a sense of wonder that rises up from the mundane to the sublime, from the gut to the scalp, from the nowhere to the everywhere, and instead of looking out at the universe, you’re looking in.

My favorite piece is quite spare, composed of two elements, two lines, relatively parallel, one thin, one wide.  There are dark prismatic bacteria climbing the yellow line while the blue stripe serves as ballast.

Onslaught of pixilated distortion.  Saturn’s rings lit by solar flares.  A soul’s life in the storm of Jupiter.  Land with no footsteps.

Of course the universe loves us - we bend it, we color it, we embrace it, we tend it.  We deify it, and it does the same for us. 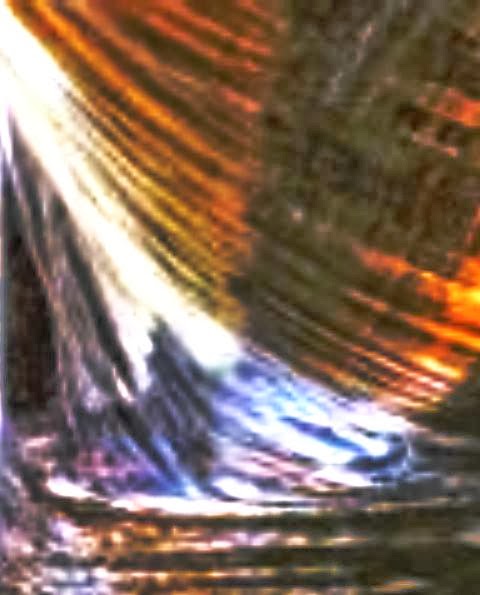 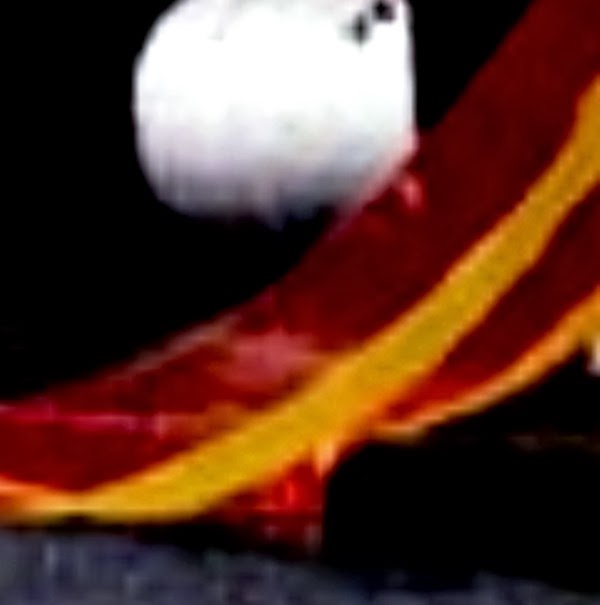 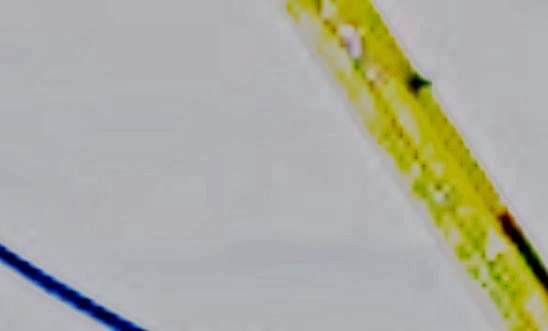 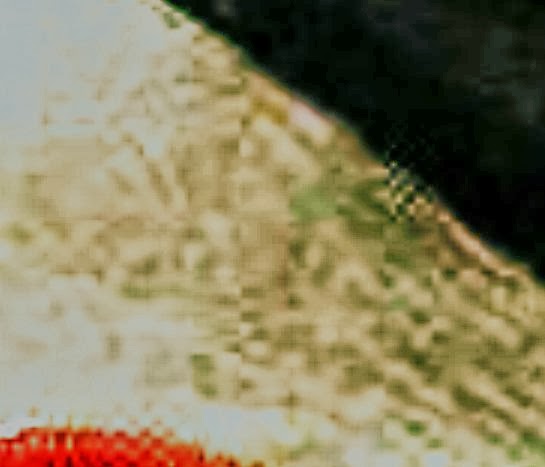 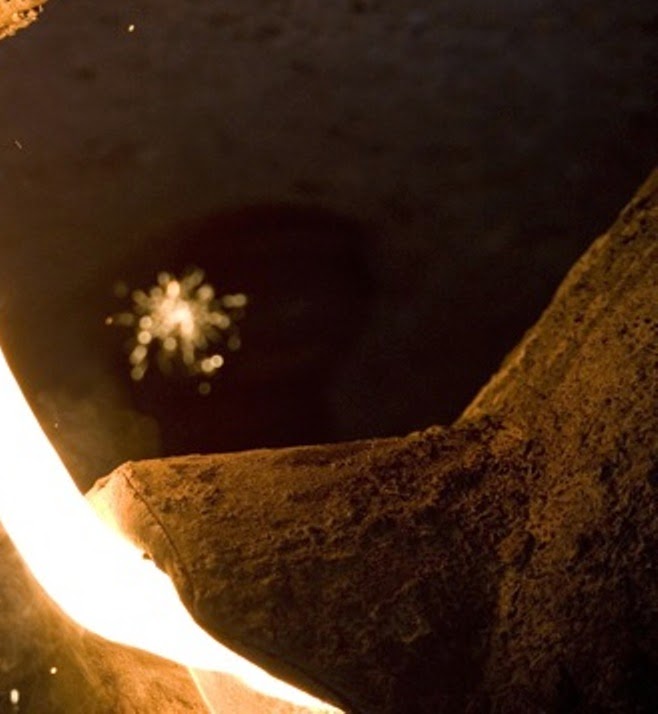 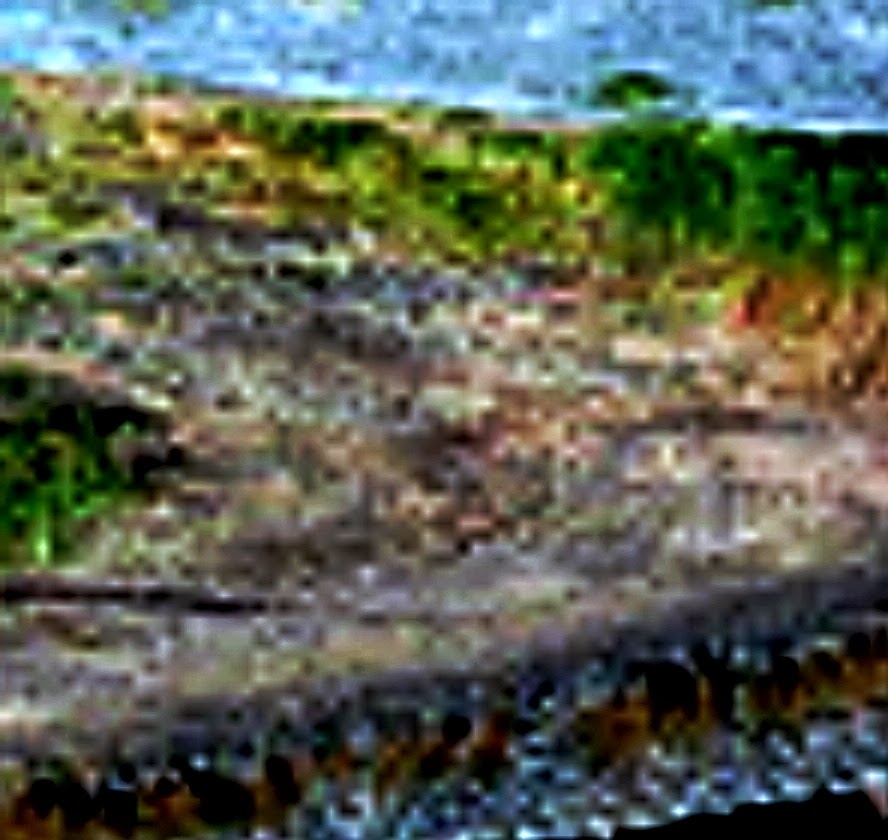 I’ve seen a lot of Amanda’s work, and I’ve been happy to publish some; I always imagine the Angel creating her art out of laughter, lightheartedness and beautiful, whimsical energy.  Images made from inventive letter/picture coactions bring both amusement and sage excitement.  One of the most interesting aspects of these things is the titles, all twists on the pics - and who could not love titles like ‘Cinderella Snowflake’ and ‘Scuttling Sam Bones’?  Not everyone can make a crisp graphic work like Amanda can.  And no one else can put a head on it.

She may live in our newly constructed Age of Quasi Reason, but she’s not a slave to it the way some visual poets are, like those who construct little scientific systems devoid of soul and spirit.  Amanda may live in Candyland, but she knows how to tame the gum drops. 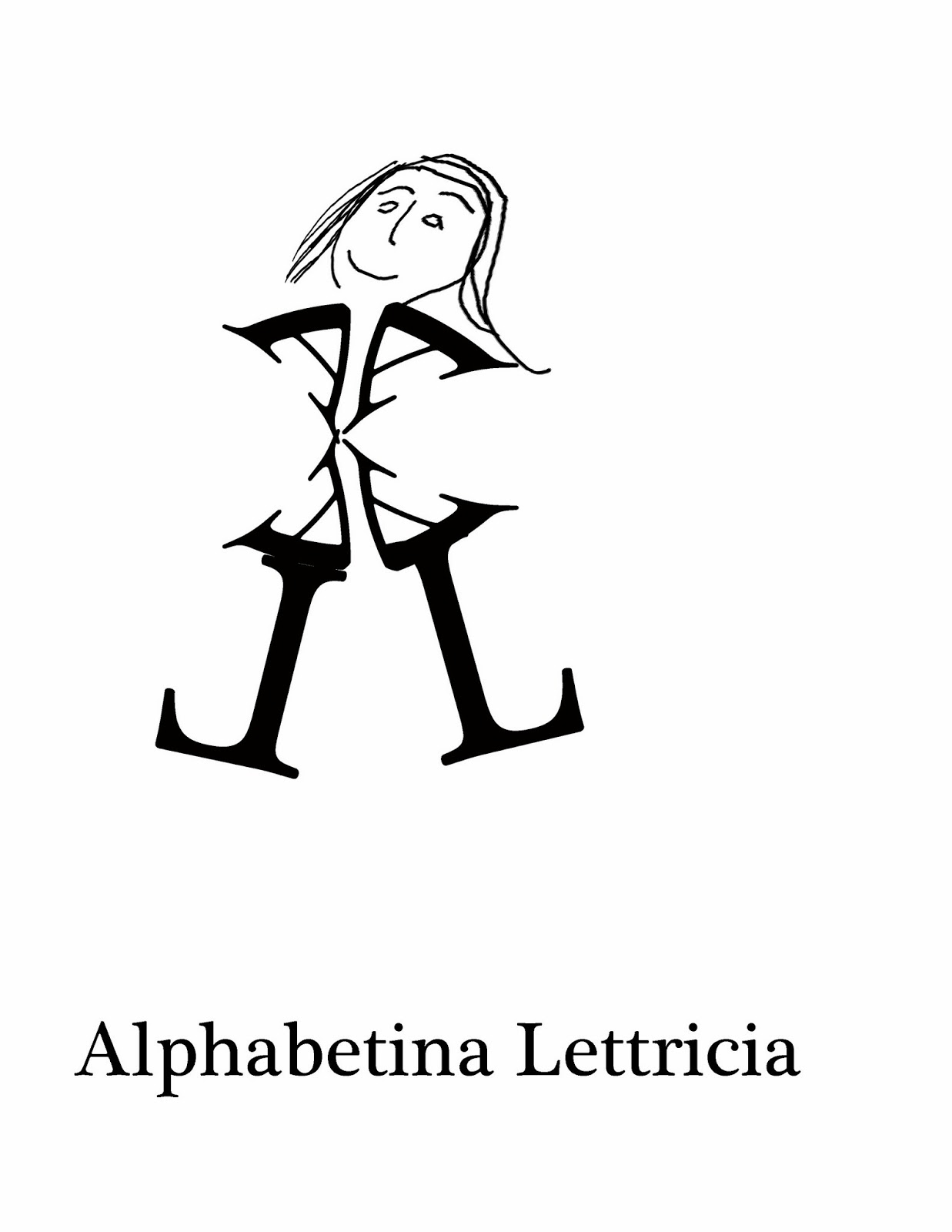 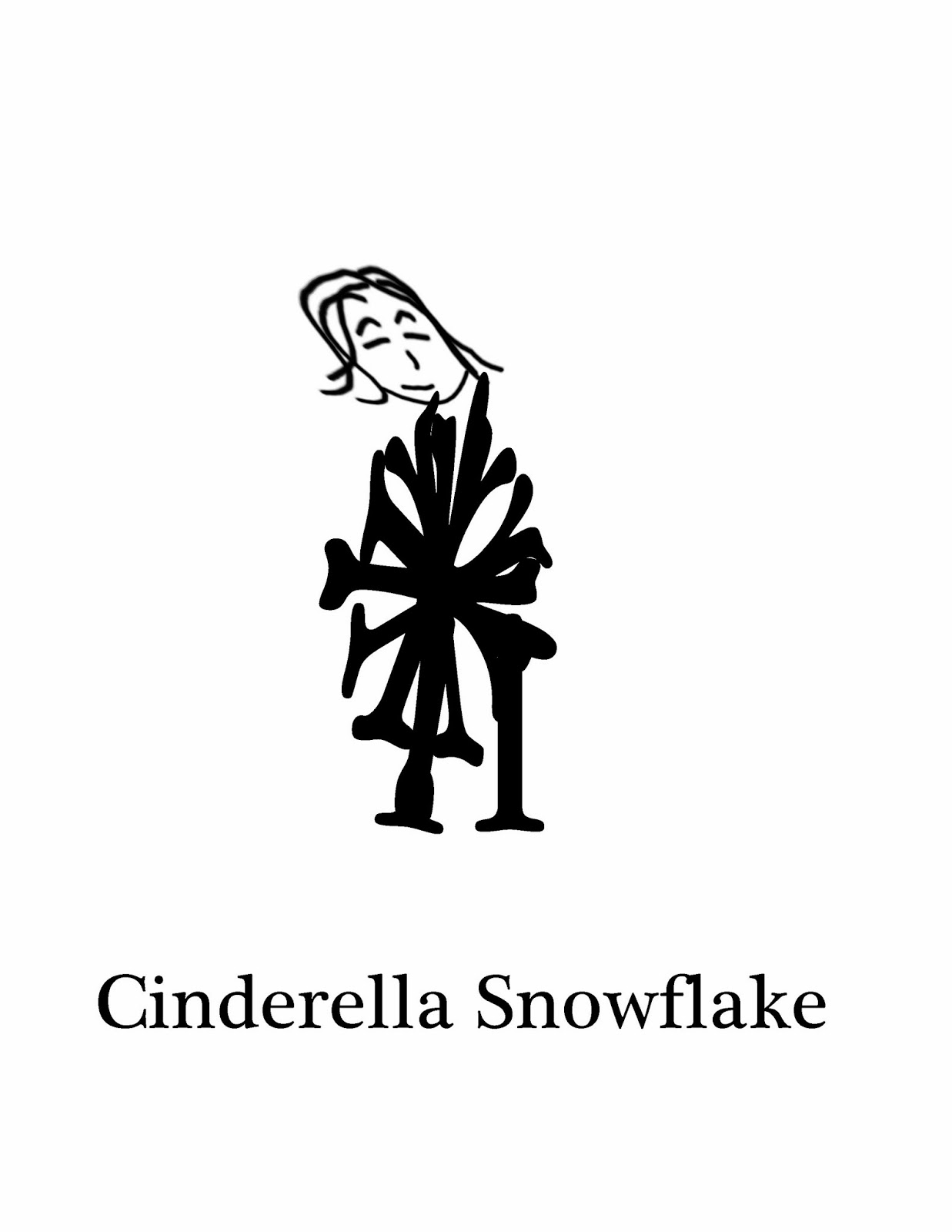 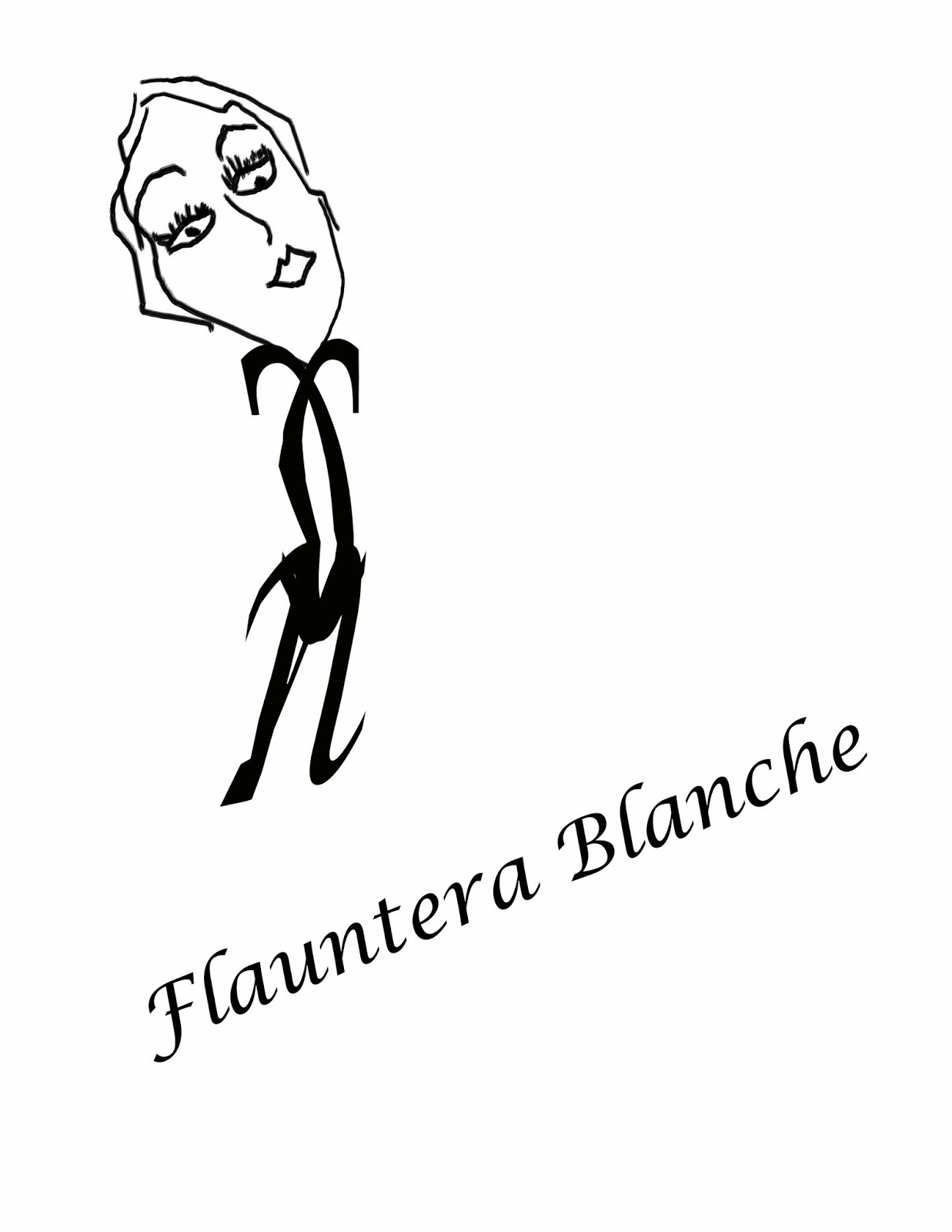 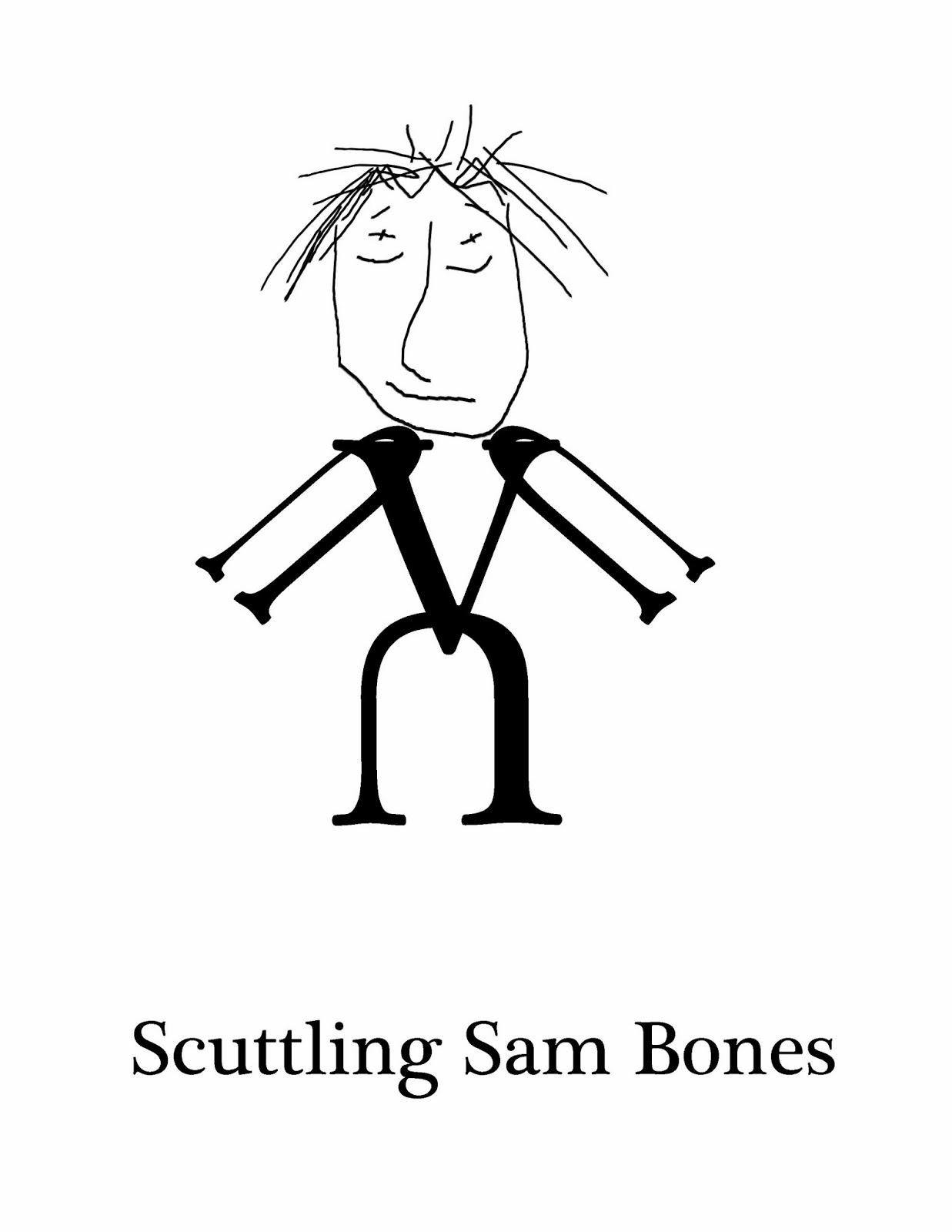 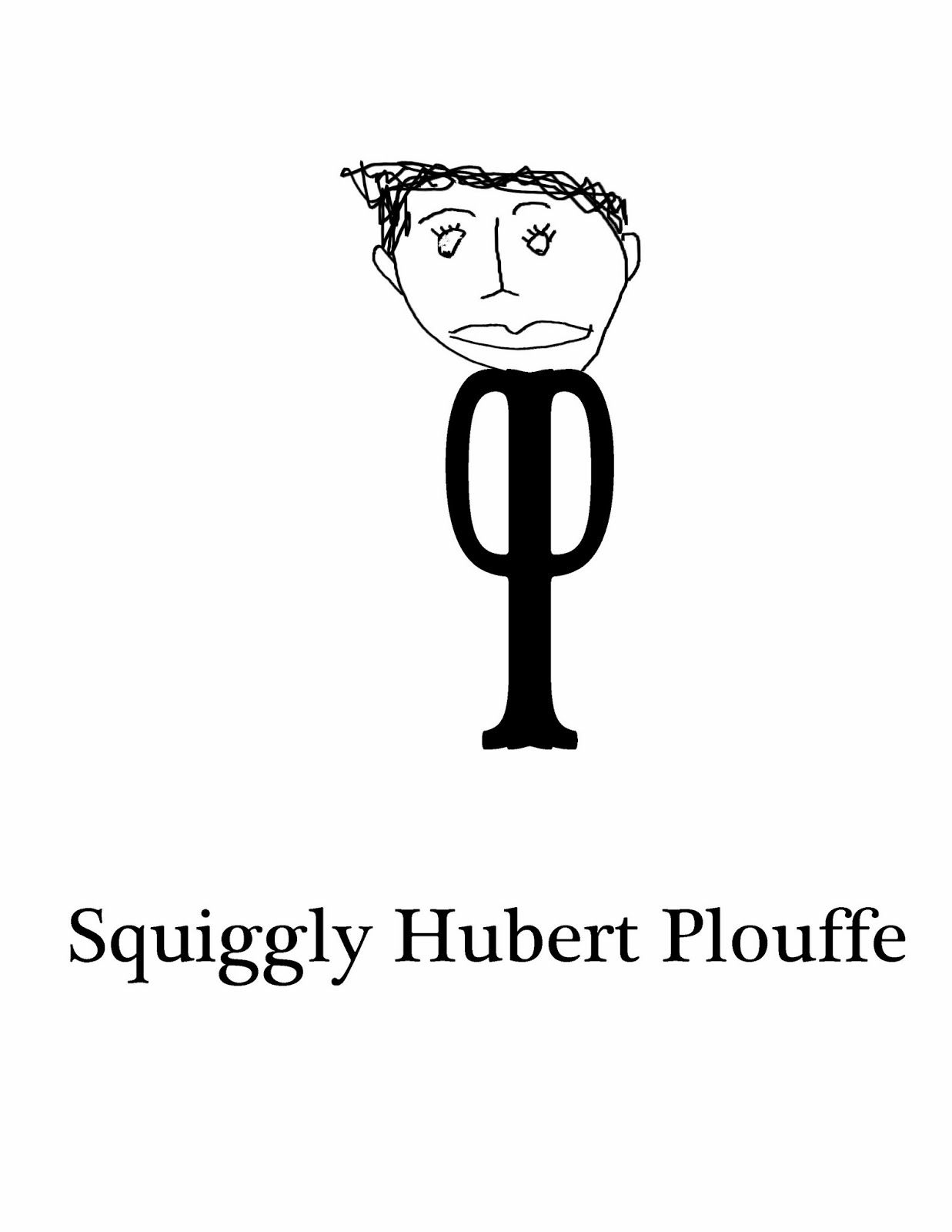 You are entering a world of grey smoke, of amorphous shades, of letters and shapes that hide and tease.  There is a kind of communication here, but you can’t quite put your finger on the transmission or the reception of it.  There’s music, quiet and strangely skeletal.  There are images that swim in brackish water, in our fragile consciousness.  She’s even left mistakes, pentimenti, that enhance the brittle lines, making curious glyphs that quiver in the grey undulations of nonexistent space.  Sigh.  Weep.  Take your last gasp.  Mix it all up and somehow it comes out as a hazy frightening beauty. 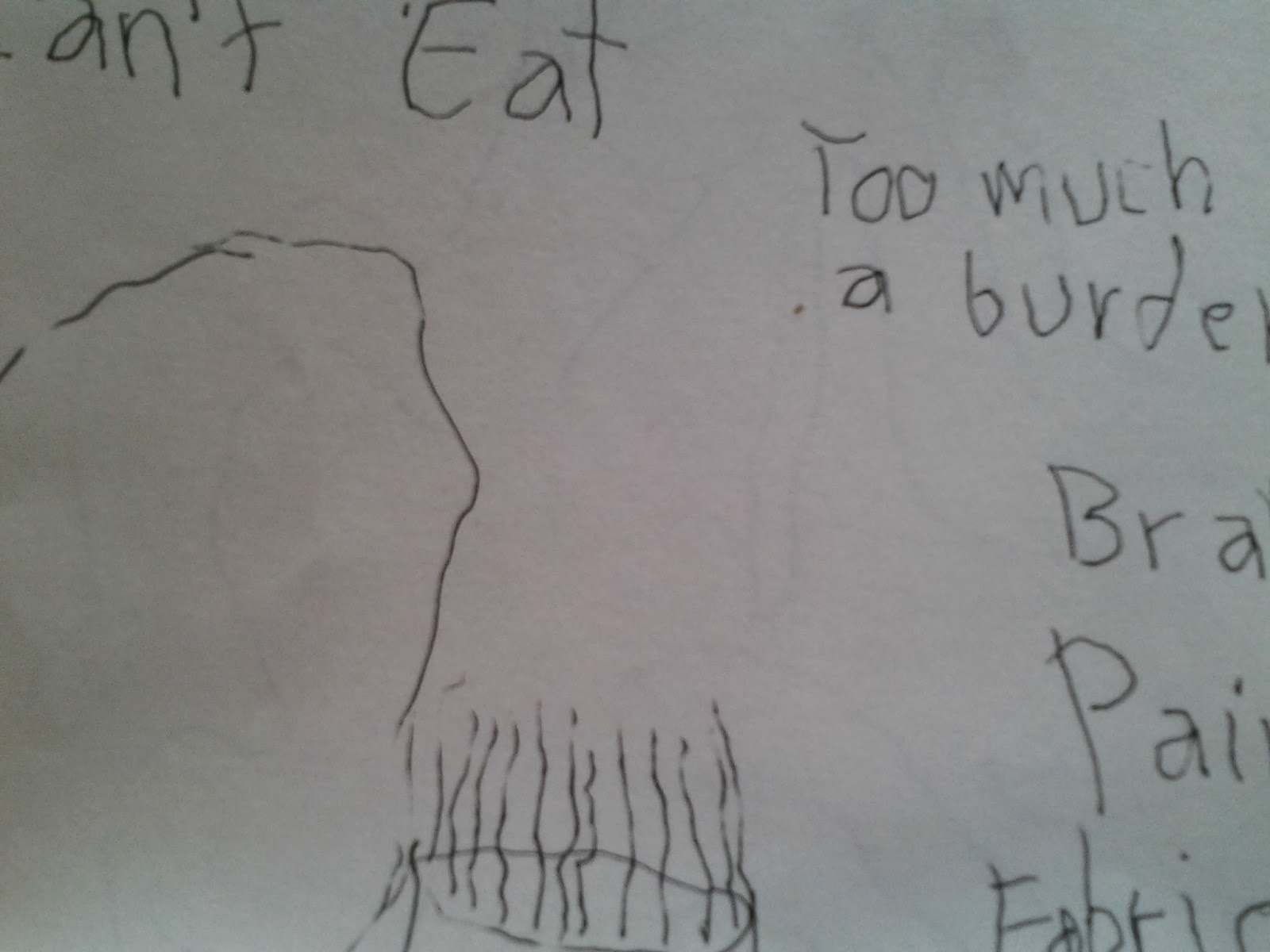 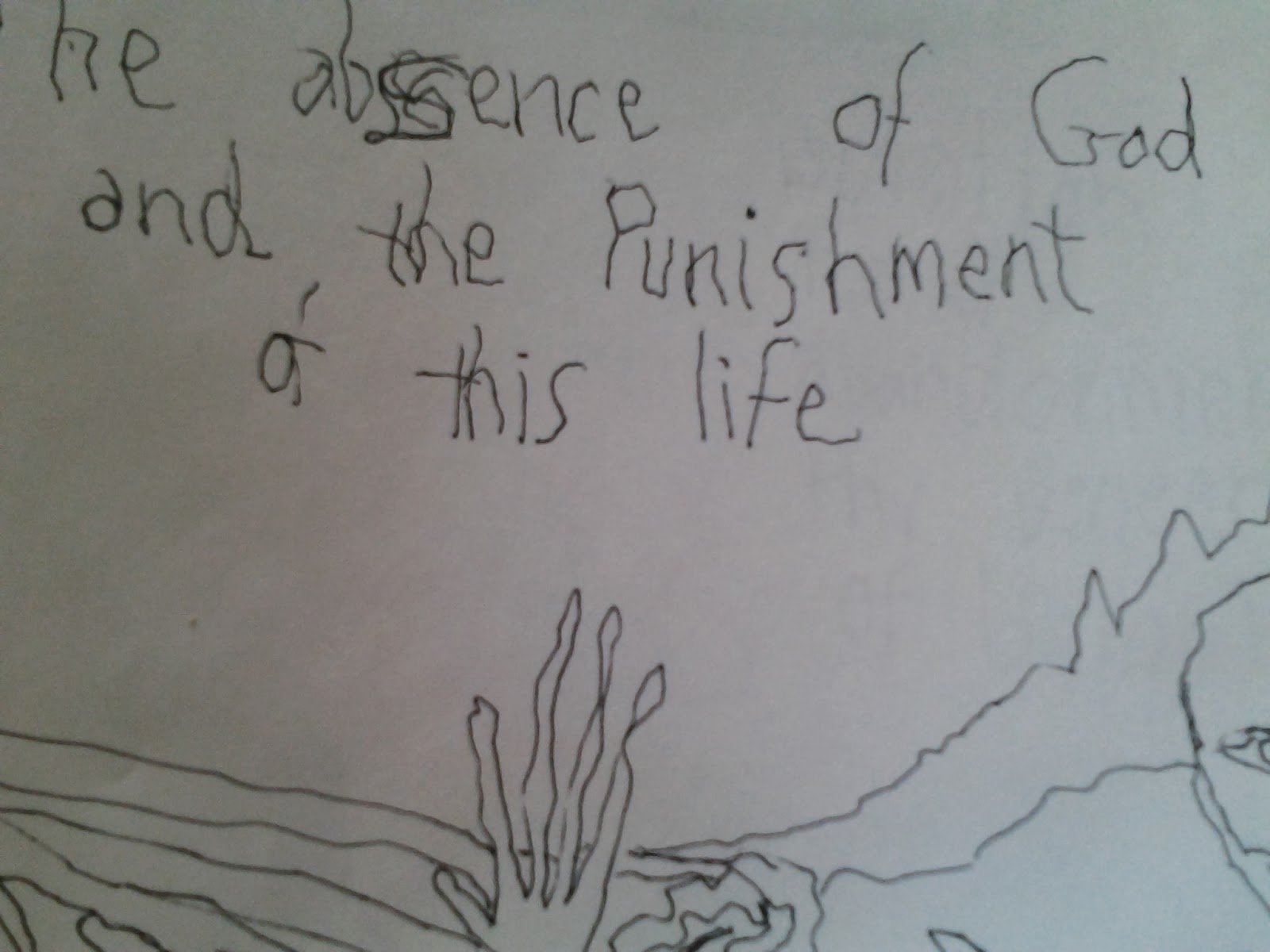 The absence of God

What I see here is Limarev’s pure mathematics, his bold intellect enlightening us all with crisp clean purposes and lines, with geometric time vectors.

What I see here is an extremely advanced theorem that explains travel in the fourth dimension, even the fifth with reverberations that journey to the future or the past.  It’s hard to take geometry and set it free, but Alexander does it.  He plays a crazy game of X and O’s- substructures relate to the gestalt, relationships among the Xs are guided by spiritual directions, created point to point, membrane to membrane.

What I see is an X in the center box - and guess what - you’ll win every time. 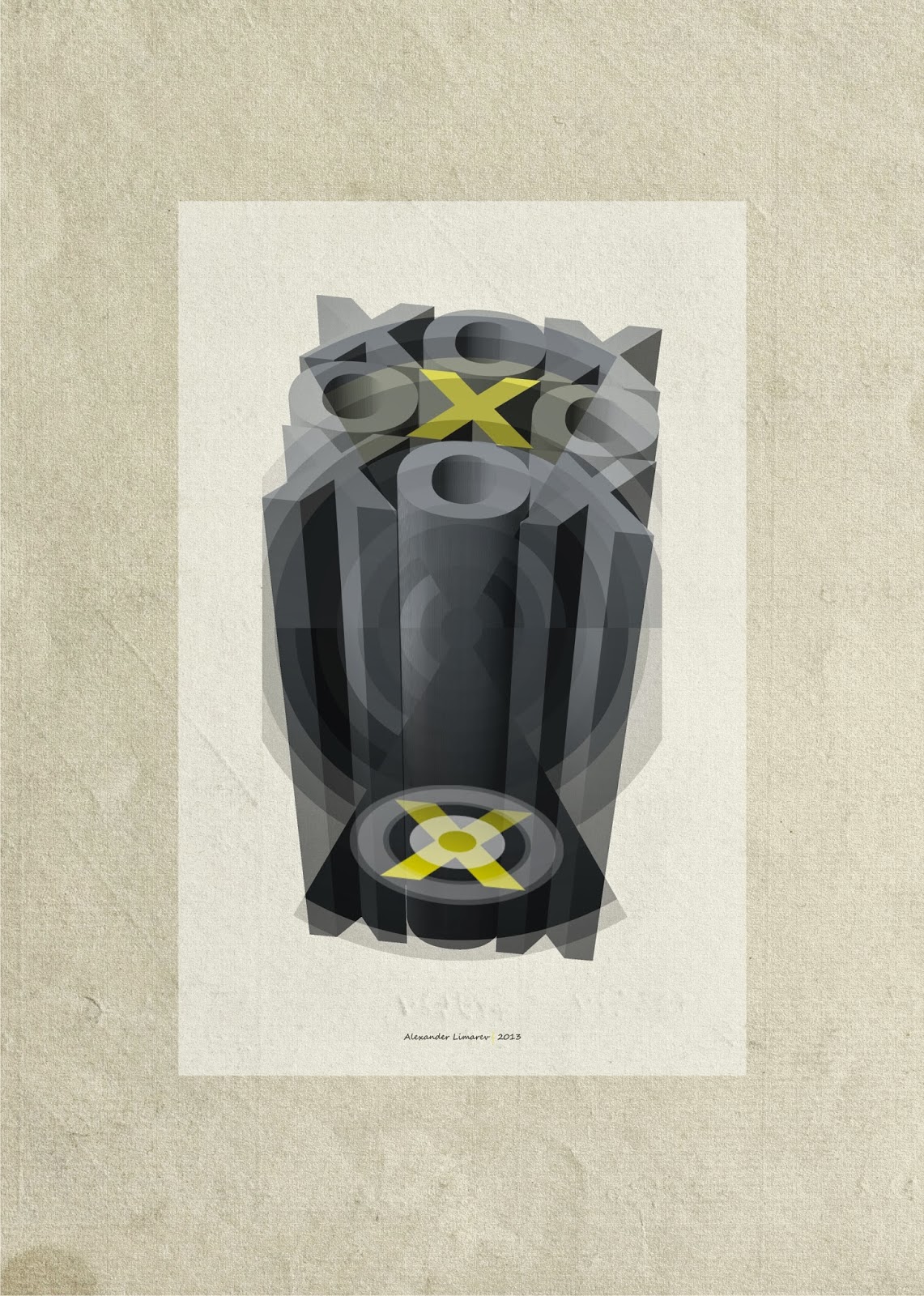 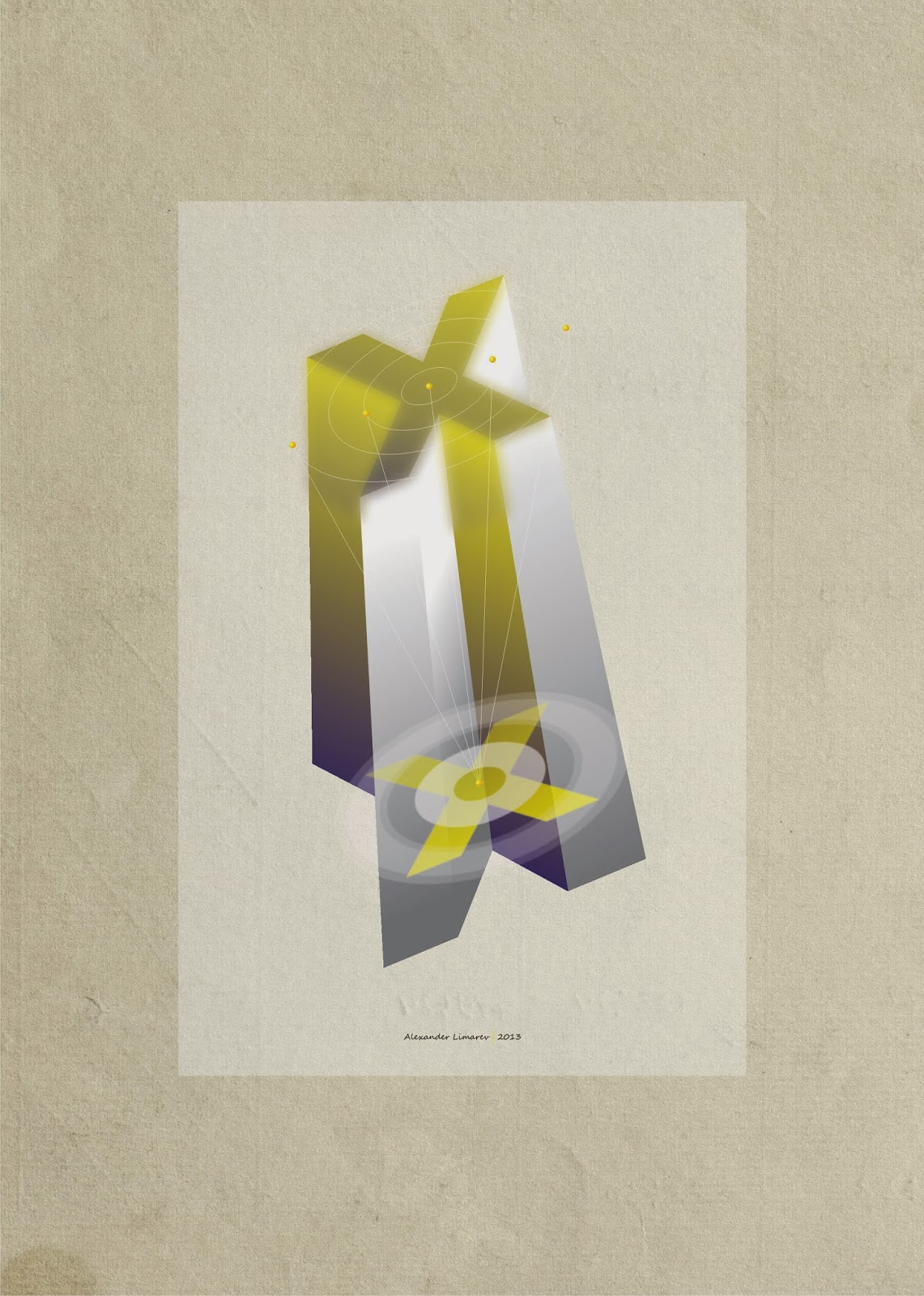 Guy and I have been sharing work for thirty years or so, and  I’ve seen his stuff go through a bumper to bumper evolution; certain elements will remain for years as slowly waxing aspects join them to create new combinations.

So let’s talk about David Salle- neo expressionist figurative/abstract apparently random painter.  The only reason I mention this artist is because I see a passing resemblance between Guy and David; each has a kind of outsider feel, a feel of pissing on the establishment.  Their work comes from an obsessed mind that burns holes in the artistic community, that ruptures the snooty establishment.

David’s art is exciting in its juxtapositions and so is Guy’s; but Beining has an extra bullet in his clip - text.  He uses half obscured words, phrases that almost make sense, that are delivered with the same ragged style as the images.  Figures peek out, or should I say push out from beyond the veil. 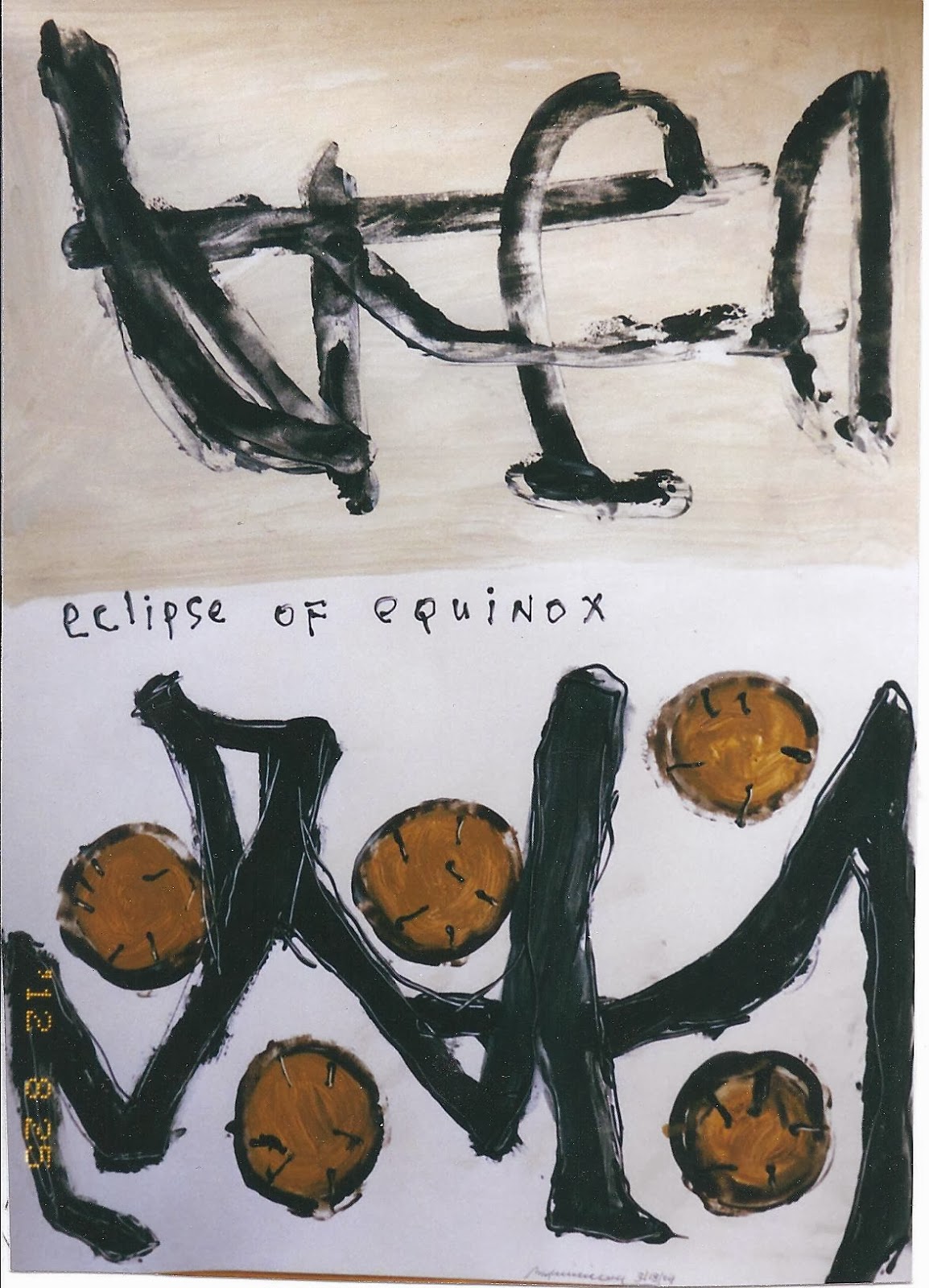 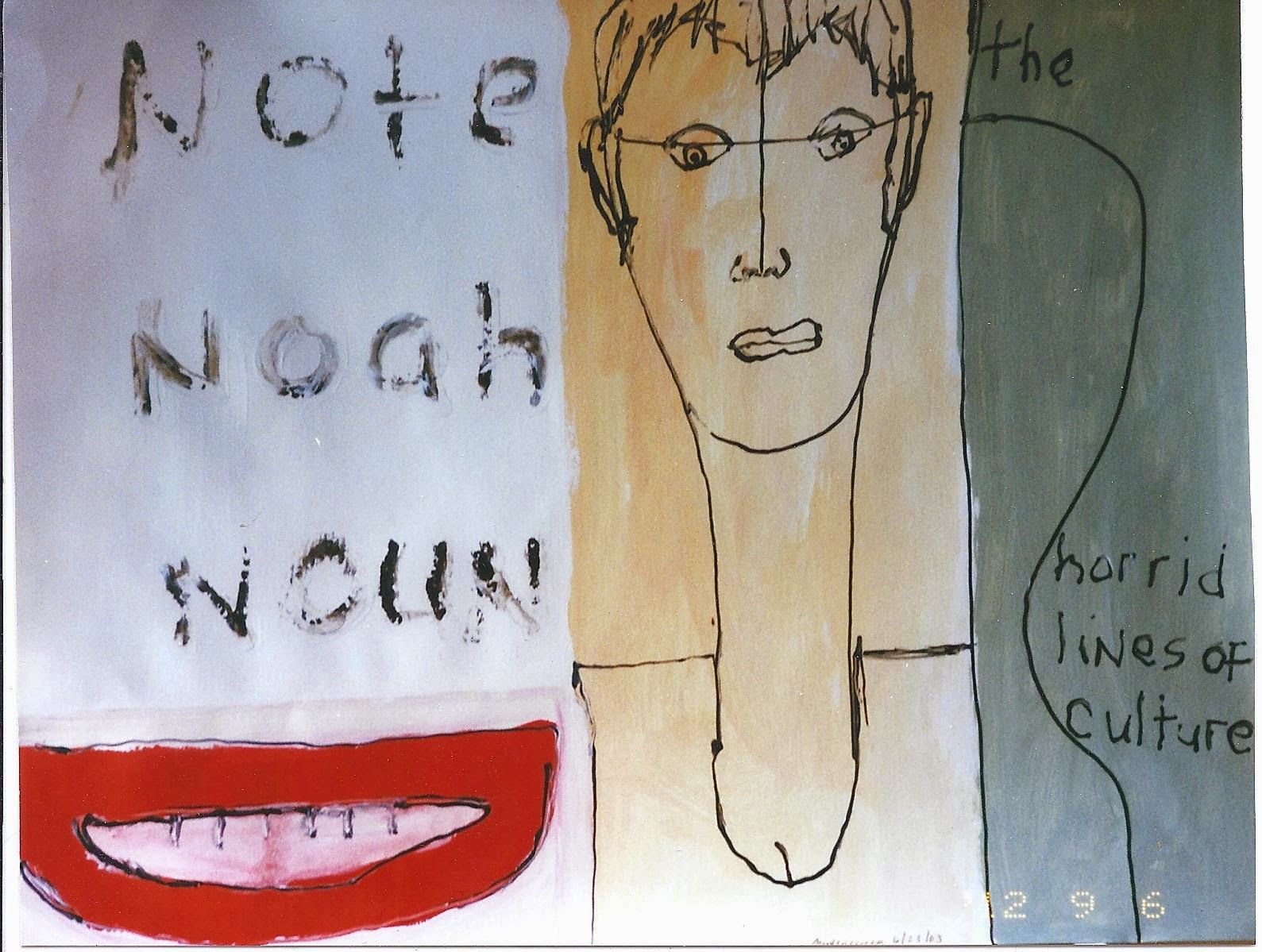 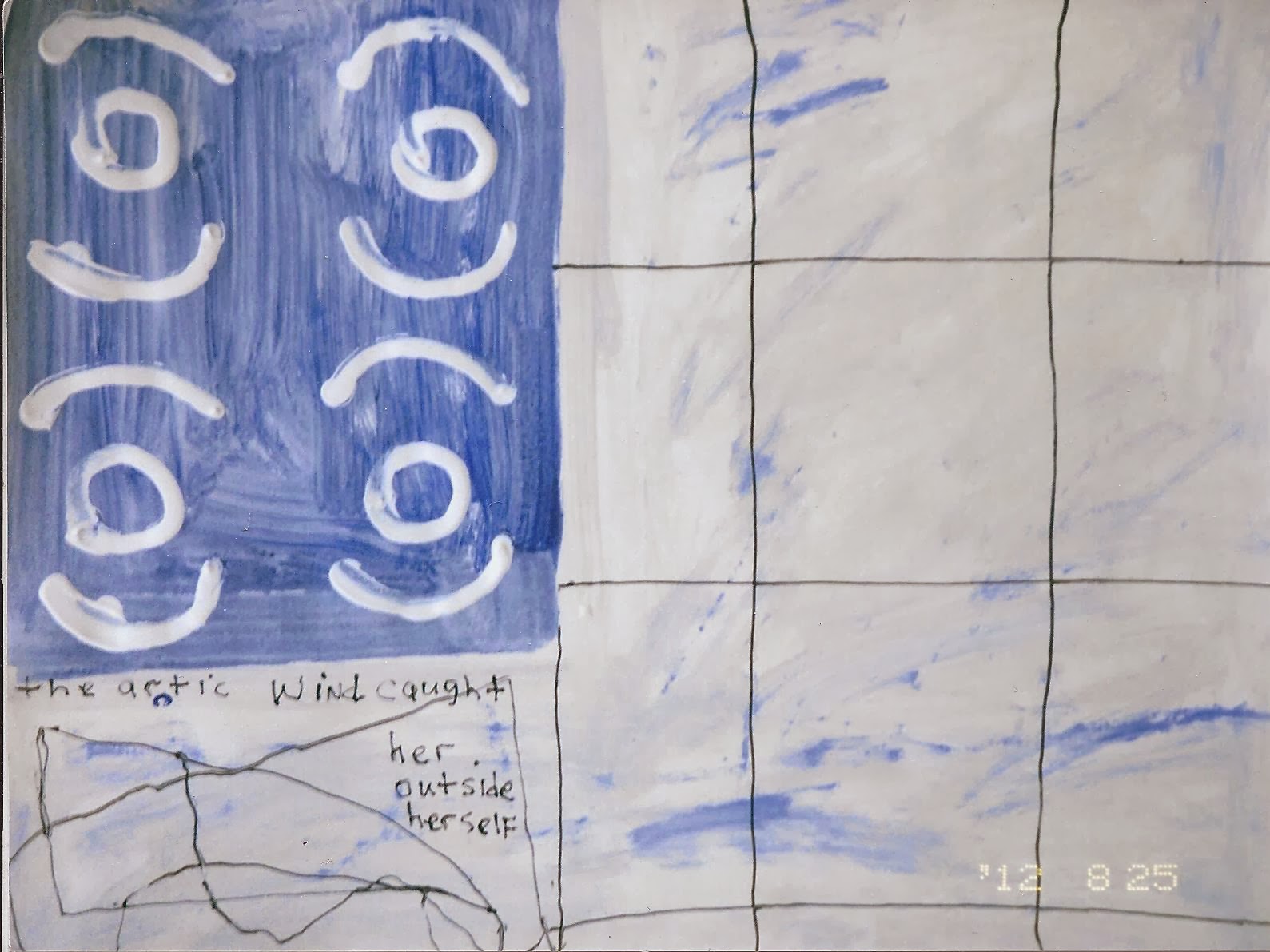 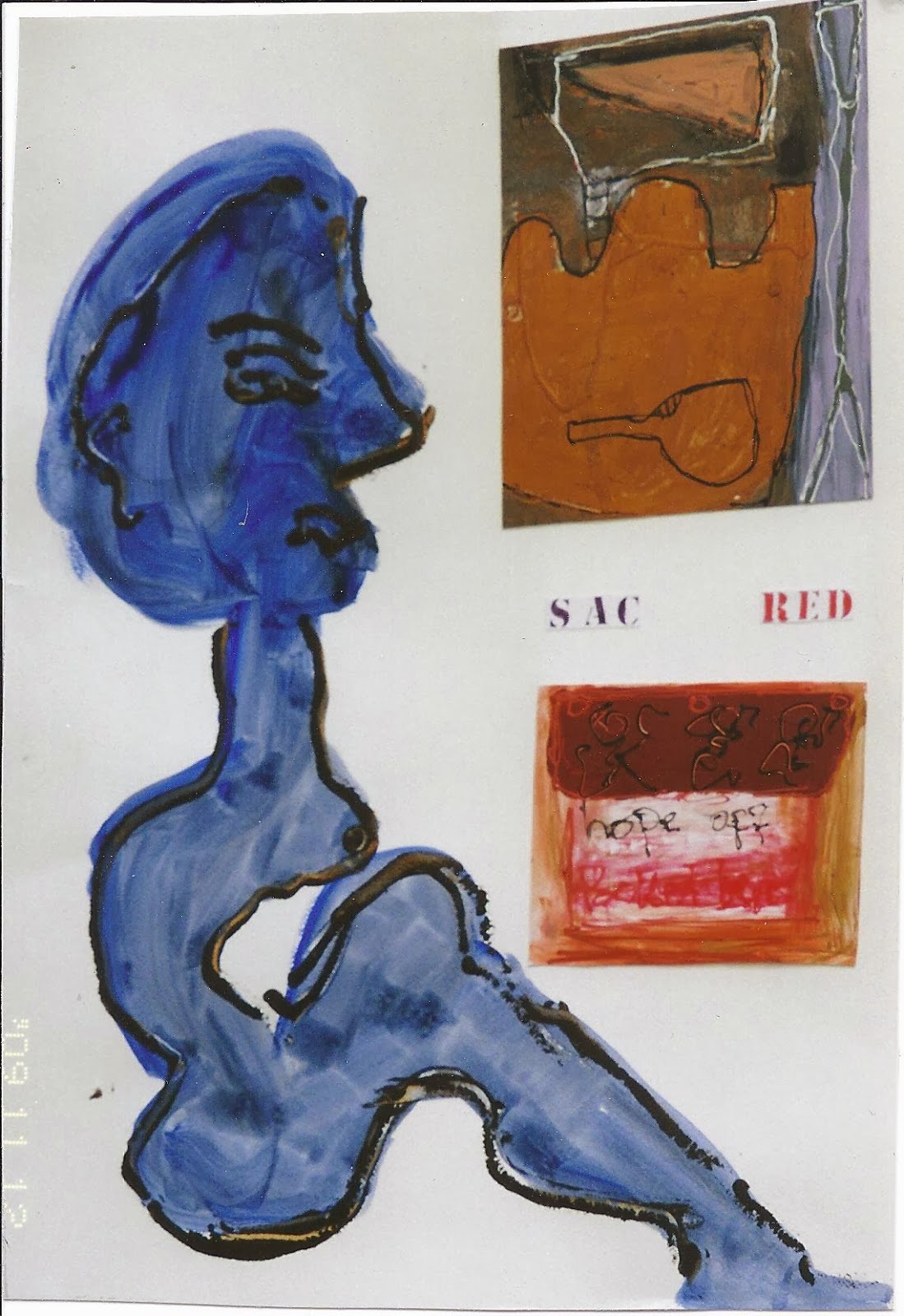 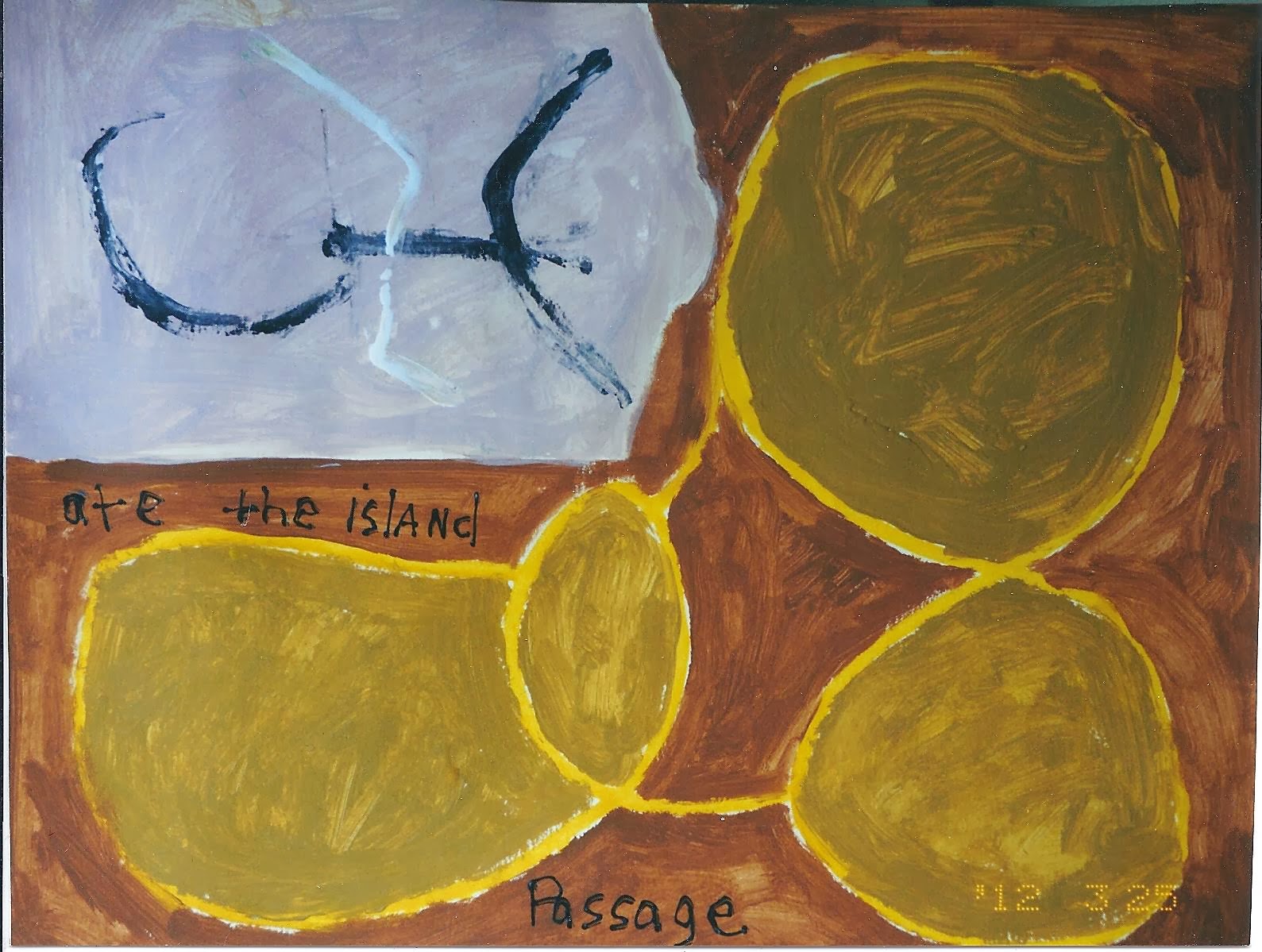 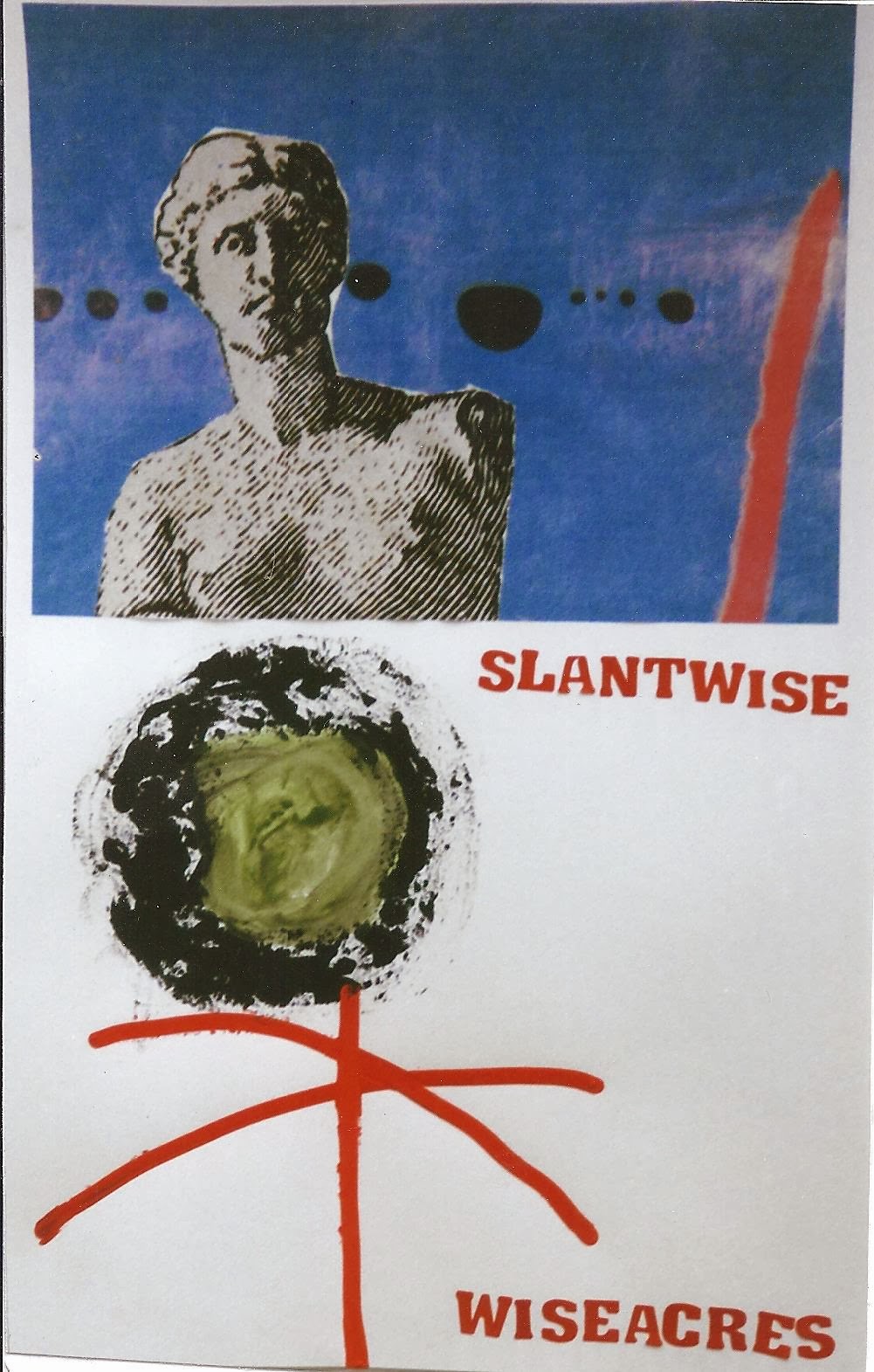 Most of the pieces here employ massive paint spills, submerged words and Joseph’s Technicolor coat.   The interpretation of buried  speech and colored bars found in ‘An Homage to Correctness’  and ‘n arrow’ creates a ladder, colored smudges growing, heading to a world where paint has been superseded by strokes that look like equations, Hebrew letters, and pieces of bacon (a pencil sketch off to the side of an arrow).  A really interesting piece has three exterior geometric forms, all the same.  What makes them exciting is the different treatments of texture and color.  Globs of primary colors make their statement; one has blue paint traced around the outside edge of the canvas shape.  This work, along with the other paintings we see here create a beautiful sprawl, each piece batting each piece, each structure reaching out to another, each color, each shape passive and active.

You can’t really intellectualize these things - but I guess that’s how it has to be for us measly mortals, since we have no other choice. 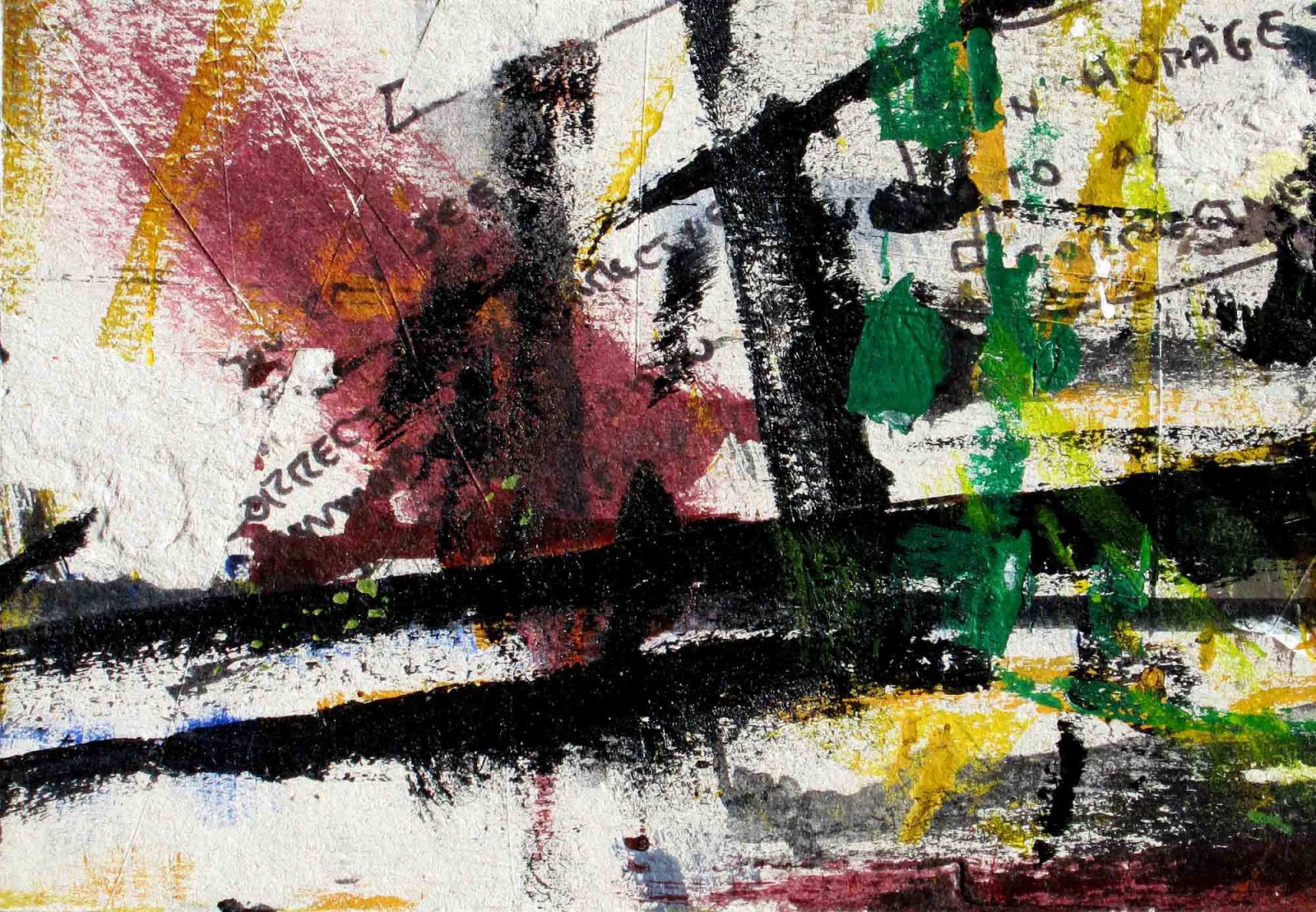 an homage to correctness 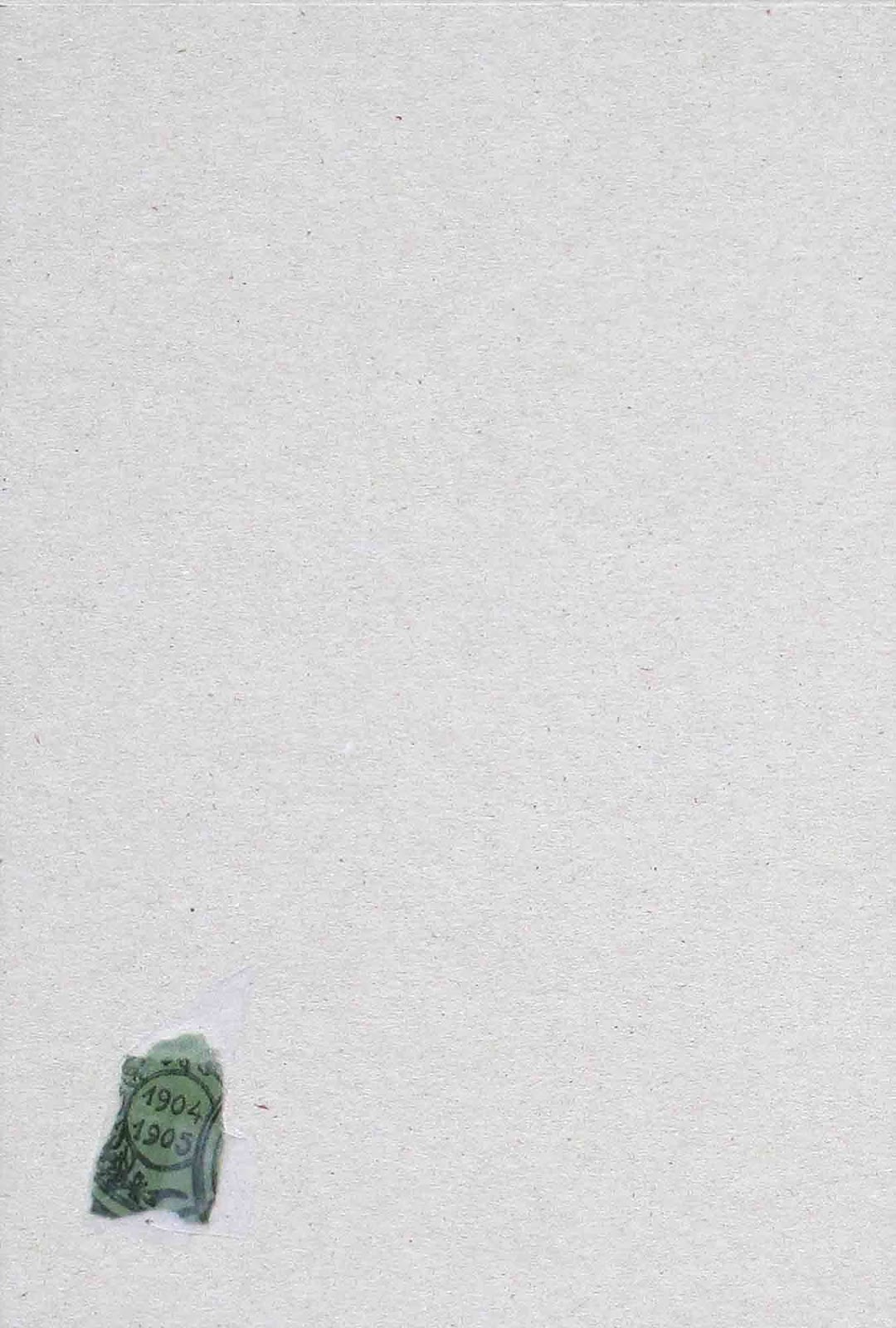 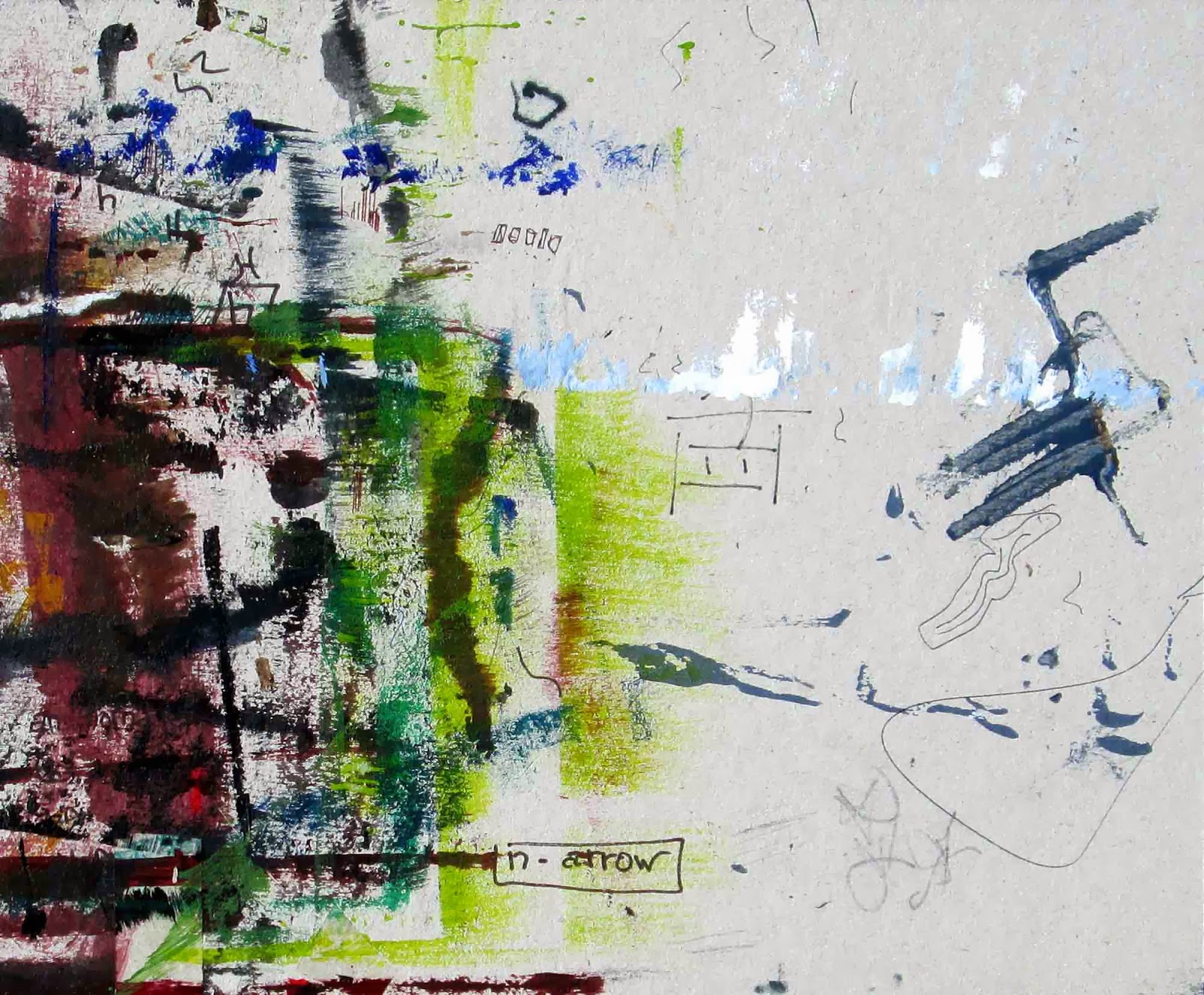 This piece is titled “Come and Join Our Party Dressed to Kill”, lyric by Pete Townshend and the Who, 1982.  Later, in 1984, inspired in part by both the song and the Sistine Chapel, I began to assemble my most ambitious collage, 4’ x 6’ with hundreds of images merging into one, each face bringing its own madness, its own obsession, its own delusions.  Beings of lost laughter, of all varieties of perversion embrace with spite and with love, with the fever of a Post Theory maelstrom, while visual poets race through the San Francisco night, spreading their own virus of creativity, their own source of beauty and satori.

The first illustration is the full piece.  The next four are enlarged quadrants. 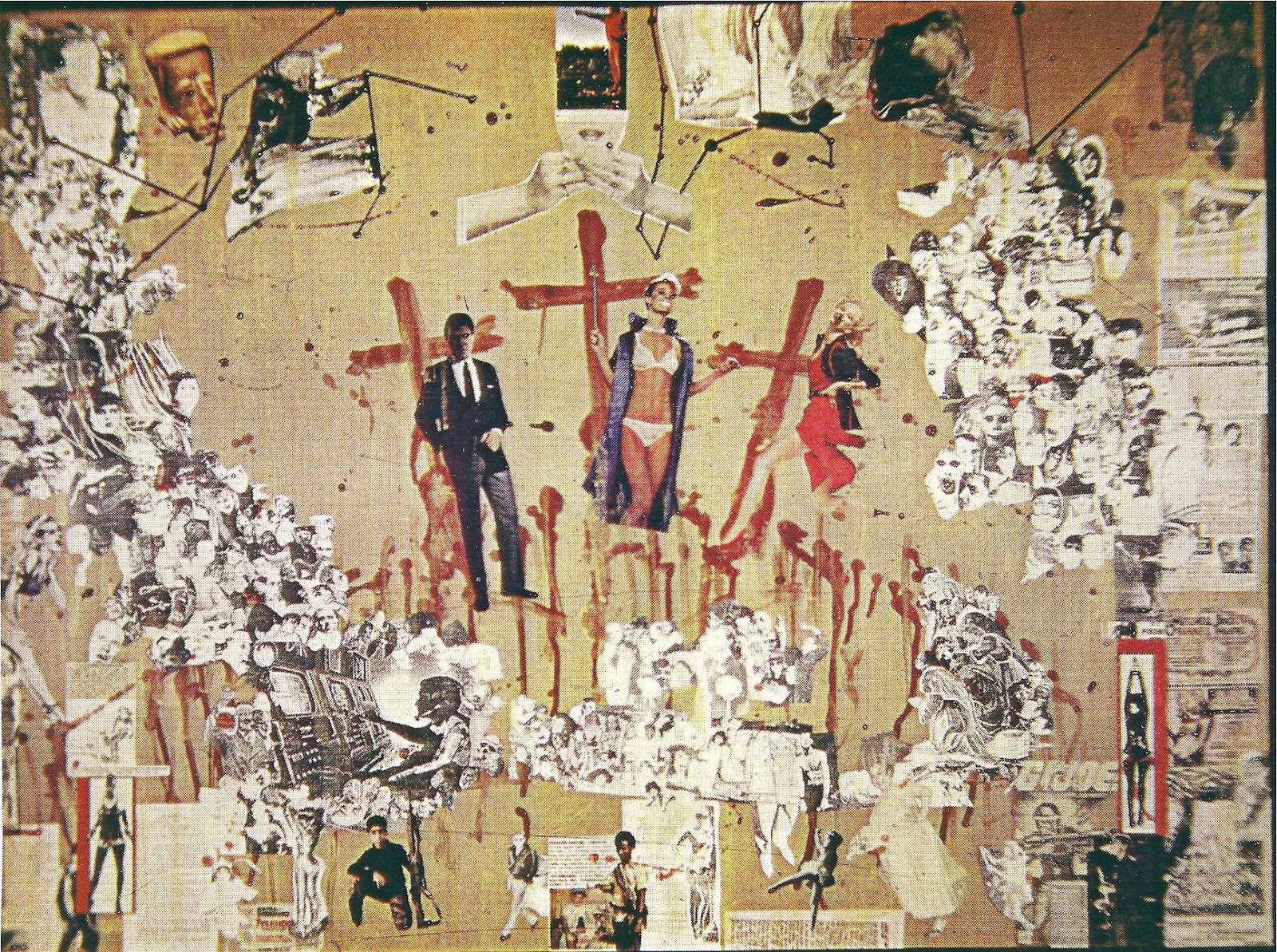 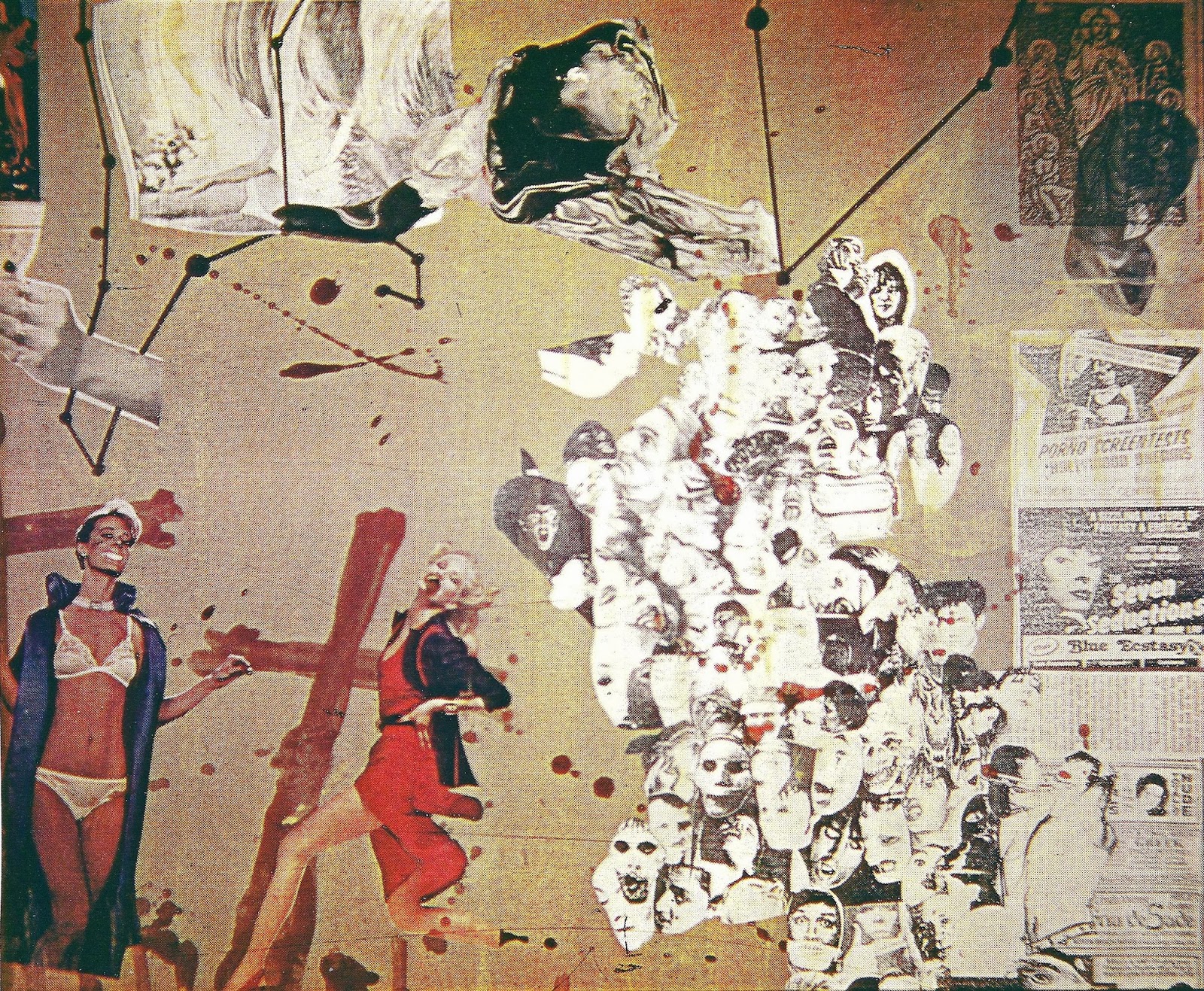 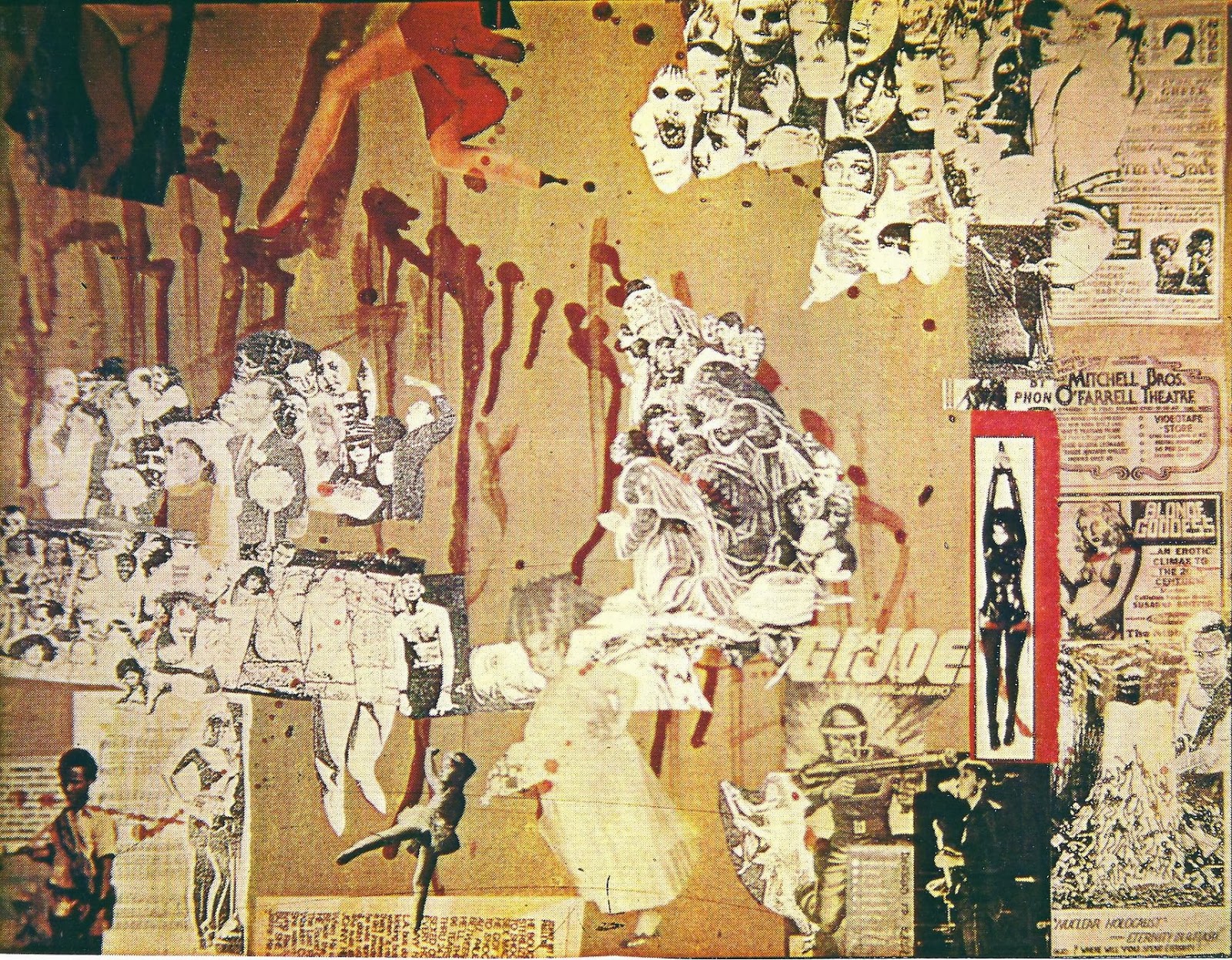 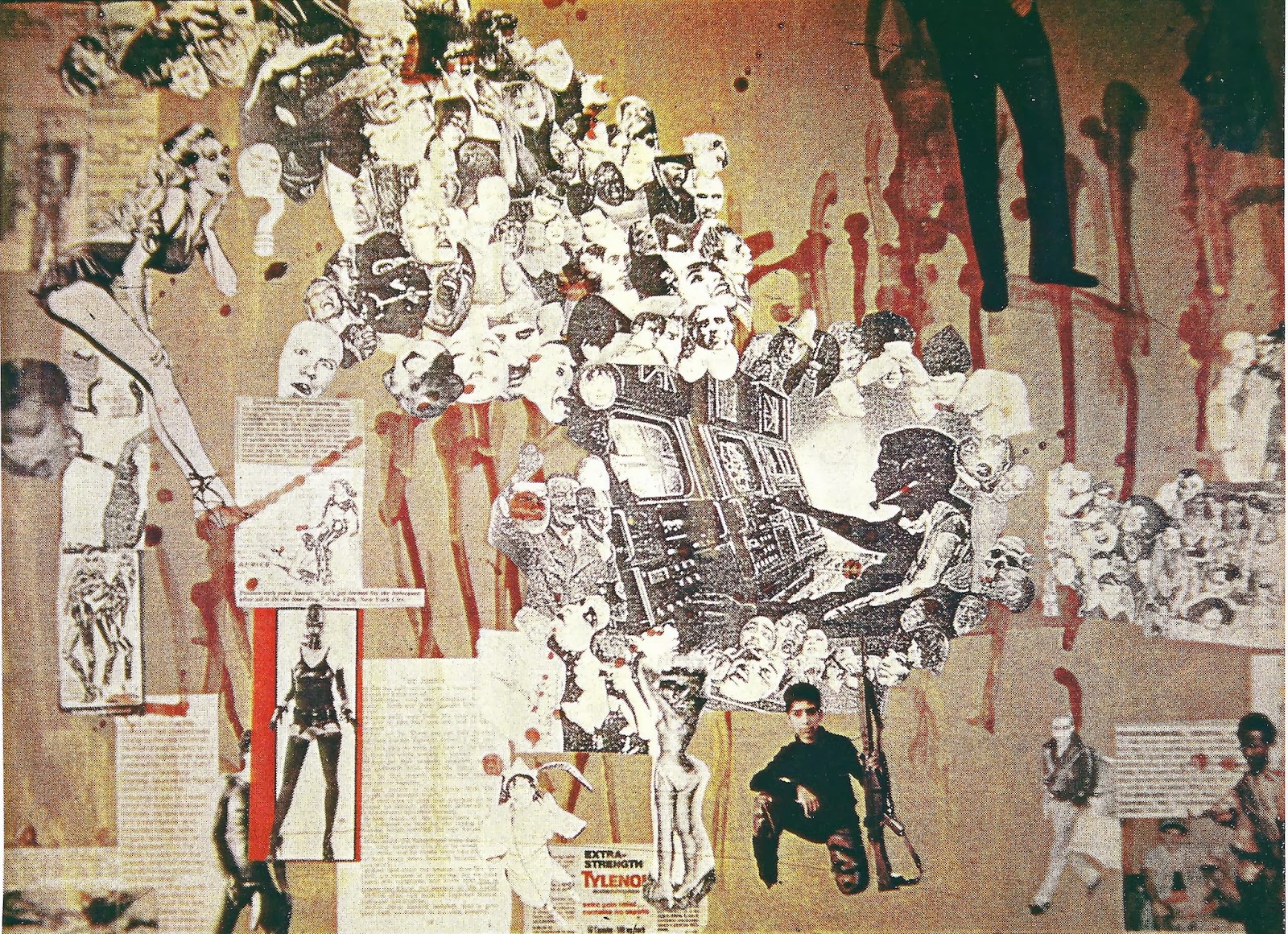 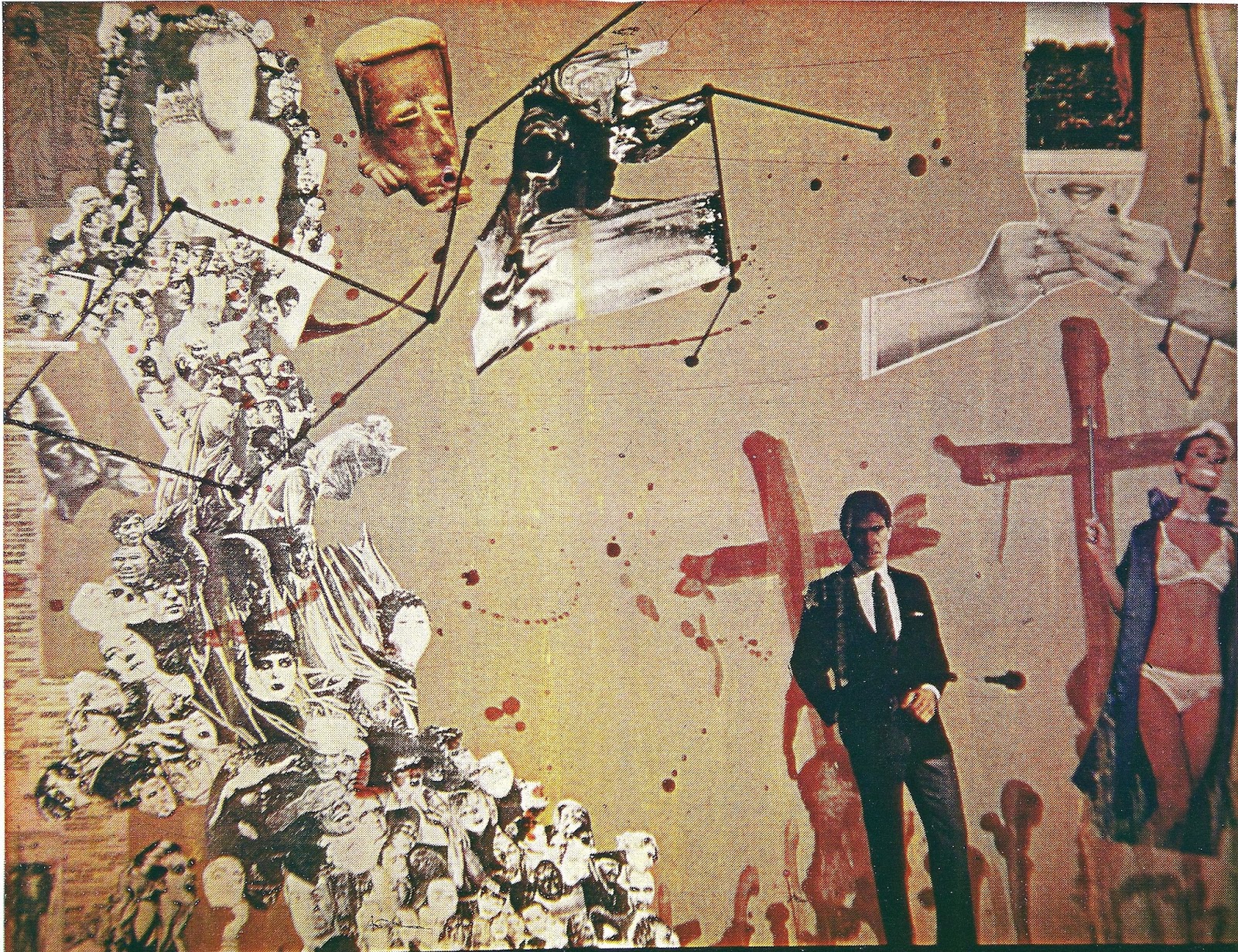 Posted by Bill DiMichele at 6:20 PM